The Maricunga gold belt extends over a distance of approximately 150 km from north to south and is approximately 30 km wide, close to the border with Argentina. Mineralization is related to the emplacement of Miocene (11-10 Ma and 8-7 Ma) age calc-alkaline volcanic and sub-volcanic units over basement rocks of Paleozoic to Cenozoic age. The Maricunga belt hosts a number of gold and goldcopper (silver) deposits including La Coipa, Maricunga, Aldebaran, La Pepa, Soledad, Pantanillo, Lobo, Escondido and Marte.

The structural setting at OdAE (and the balance of the Volcan Project to the east) is related to, and associated with, the formation of the Copiapo (+200 km2 area) stratovolcano (Volcán Copiapo) and may also be related to regional northerly-trending high angle reverse faulting. Cameco (Czollak, 1992) identified three generally moderate to steeply dipping fault systems, trending northwestsoutheast, northeast-southwest and east-west, and considered the northeast-southwest and east-west trending systems to be the more important structural controls on alteration and mineralization.

Regional Geology and Deposits of the Maricunga Belt 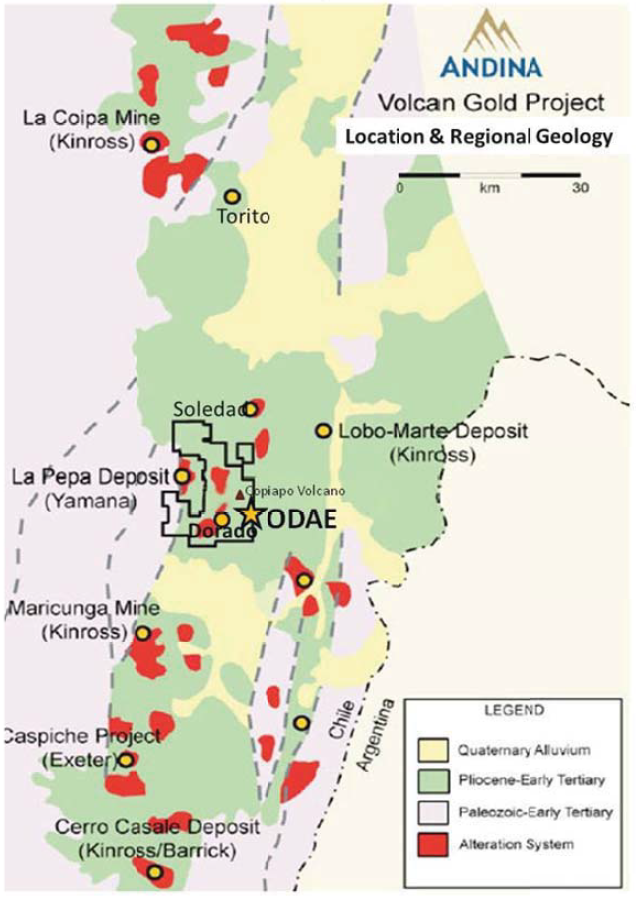 Gold mineralization in the district area has been recognized as potentially economic deposits and as gold exploration targets within the Volcan Project area to the west of OdAE. The local geology generally comprises the following lithologies: gently dipping younger fresh andesite flows and intermediate airfall tuffs and dacitic crystal ash flow tuffs into which are intruded and older porphyritic volcanic and sub-volcanic domal dacites/andesites. These rocks in turn have been intruded by mineralized porphyritic andesitec domes and by phreatomagmatic and hydrothermal breccias. The zone of mineralization is located within an erosional window through the overlying fresh andesites which dip outwardly about the mineralized and altered domal hydrothermal system.

The hydrothermal alteration observed in the district is predominantly intermediate argillic, with very local potassic alteration observed generally at depth. The permeable horizons of the tuffs are characteristically affected by steam heated alteration which consists of a mixture of alunite-silica-gypsum, with local concentrations jf native sulfur. Advanced argillic alteration is found at the margins of the steam heated zones and is structurally controlled in the upper parts of the porphyritic unit. There is a strong hydrothermal overprint with pyrophyllite-bearing advanced argillic alteration passing into intermediate argillic (sericite-illite) within the OdAE area as indicated by ASTER and SAM imagery.

Local Geology of the OdAE Sector 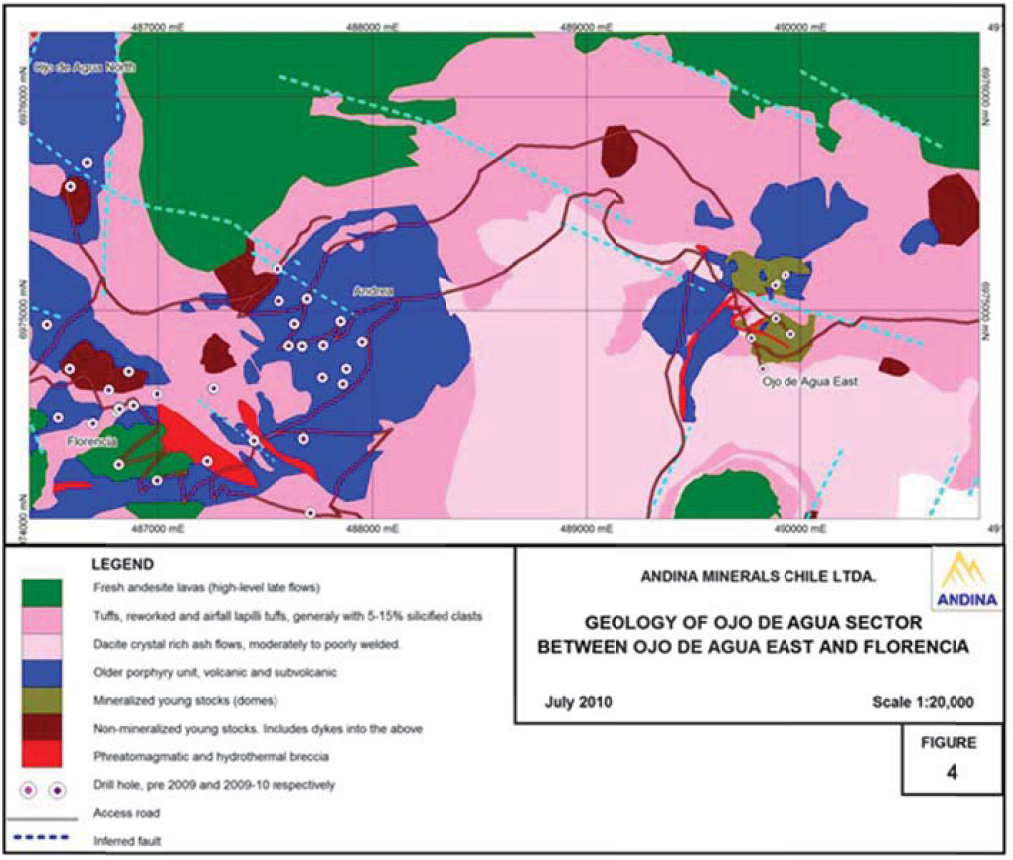 The OdAE Project is located 6.5 km northeast of the Andina Dorado deposits and 3 rv due east of Ojo de Agua (ODA prospect which host the Andrea Florencia targets).

The mineralized/altered rocks, which underline the sotheasterly dipping unaltered porphyritic andesite volcanics lawa flows, are exposed through an erosional window. Remnants of the andesitic lavas, etc., outcrop at northern edge of OdAE prospect/ The andesitic lava sequence is underlain by reworked dacitic ash-fall tuffs and block-and-ash flow deposits, into which are intruded andesite and dacite porphyry stocks (sub-volcanic domes). The porphyries are transected by multiple, and apparently related, altered and mineralized phreatomagmatic and hydrothermal breccias.

The following describes the various rock units and alteration types that have been identified at OdAE:

Dacite (to Daciandesite) Porphyry: Several, small sized porphyritic bodies with fine to medium grained feldspar-hornblende-(biotite)-quartz. This unit includes clast-supported border autobreccias and shows strong crackling (pseudobreccias). These porphyries are interpreted to be subvolcanic domes which show flow textures on their borders and are auto brecciated (pseudobreccias) at the base.

Andesite Porphyry: Characterized by strong to moderate intermediate argillic alteration (smectite-chlorite) and strong fracturing. Includes both porphyries and lavas, and are interpreted to be the host rock for the other intrusives.

Monomict Breccia: Dominantly composed of dacite porphyry clasts which are variably matrix-supported with sub-rounded clasts to clast-supported and sub-angular clasts. The matrix comprises rock flour which locally shows fluidization, and less commonly is hydrothermally altered. The clasts are typically fine to medium in size, but can attain metric proportions. This breccia is considered to be the feeder conduit for the tuffs. The monomict breccias bound the dacite porphyries and locally show transitional contacts with the porphyries. Monomict breccias are interpreted to be of hydrothermalphreatomagmatic origin.

Breccia: This unit is composed by matrix-supported heterolithic breccias, with fine to medium sized sub-rounded to sub-angular clasts. Fragments lithology includes dacite porphyry, andesite porphyry, silicified clasts, and possibly fragments of veinlets. The matrix is composed of strongly altered and mineralized rock flour. At surface, the polymict breccia is strongly associated with faults and fractures, such that some tectonic breccias are also included on this unit. 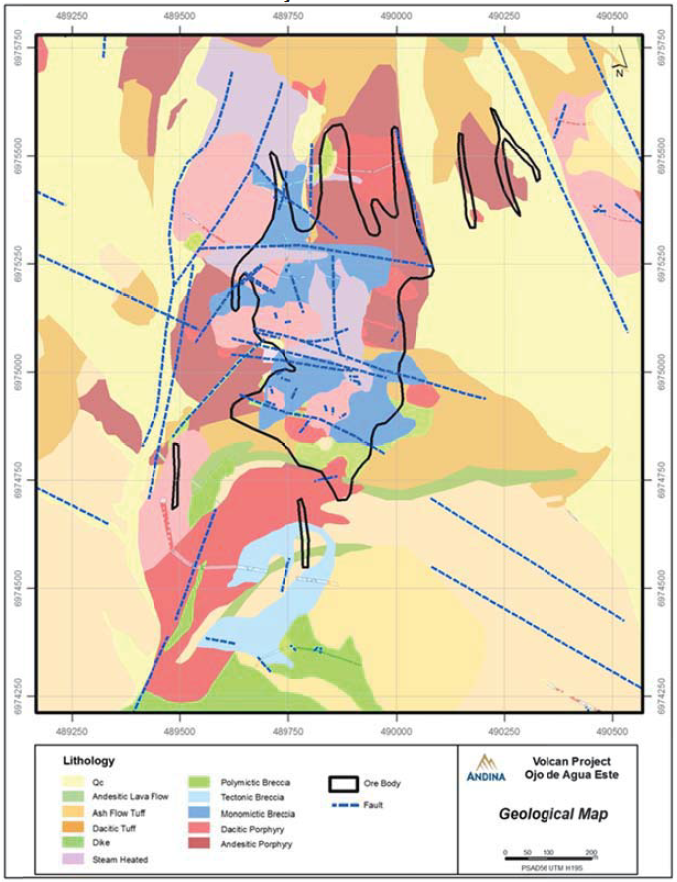 Intermediate Argillic Alteration (IAA):Characterized by the assemblage illite-smectite-(chlorite). Hydrobiotite has been identified in petrographic studies of core samples. IAA, which is seen mainly in the porphyritic units and their border facies, principally affects the mafic minerals and groundmass. The intensity of this alteration type is variably weak smectite staining hornblende to the complete replacement of the mafics and feldspars by illite and kaolin.

Advanced Arcillic Alteration (AAA): This alteration is characterized by the silica-alunite-kaolin-(pyrite-hematite) assemblage. It preferentially alters the tuffs and polymict breccias, and other units which are located adjacent to the fault zones, and is moderately to strongly texture destructive.

Silicification: This alteration is rarely found and occurs as amorphouse silica, mainly chalcedony, partly replacing the matrix and/or groundmass of the host rock as well as occuring in vein and veinlets. Typically the silicification where found accompanies the AAA as chalcedony-alunite assemblages in the breccia matrix, or as veintles. 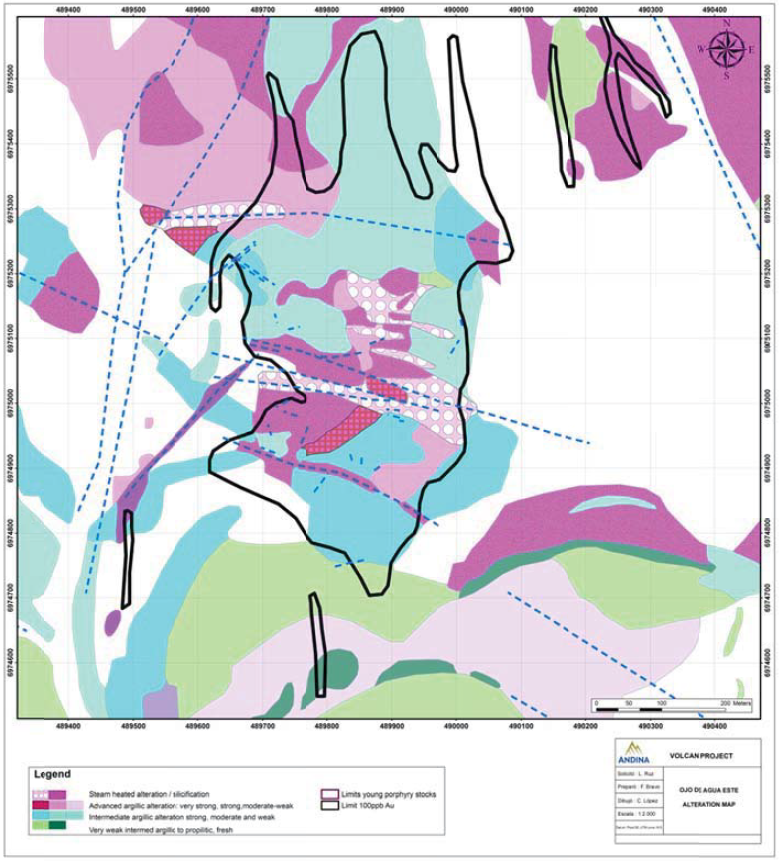 Two principal structural (fault) trends are recognized (from both surface mapping and satellite imagery) at OdAE – a NNE trending set and a WNW trending set. The NNE set is interpreted as having occurred before the WNW set as it is displaced by the latter. The WNW set shows greater areal extension and better continuity than the NNE set. A strong NS magnetic linear (Jordan, 2009) has been interpreted to occur in the valley to the west of the prospect.

Most of the surface faults have been inferred based on outcrops of tectonic breccias and/or linear zones of strong hydrothermal alteration zones. The inferred faults have been confirmed at depth by the drilling which also established that they are sub-vertical to steeply dipping to the west. The steam heated and AAA areas of alteration are controlled by the NNE structural set and where these intersect with the WNW set the alteration is enhanced. The structural intersections also favor the development of the breccias which carry mineralization.

The bedded/flow units at OdAE generally dip at about 300 to the SSE, which is subparallel to the overlying pre-mineral andesite lavas and may generally reflect the original surface. Air-fall tuffs which are located to the east of OdAE show consistently east dipping attitudes of 250 to 350, while those to the west apparently generally dip 300 to the south.

The work that has been performed at OdAE to date has generally outlined a northerly trending gold anomalous area of ~ 600 N-S by up to 400 m E-W which is defined by the limits of the 50 ppb Au contour.

The drilling that has been performed to date at OdAE has defined an approximated central Au higher grade mineralized core which is considered to be typical of the Au porphyry mineralization at the Andina Dorado deposits to the west of OdAE and which is generally flanked by a series of steeply west dipping lower grade gold bearing faultvein systems. Figure 7.6 depicts a block model simulation of the mineralization/deposit at OdAE as generated by SRK (2011). 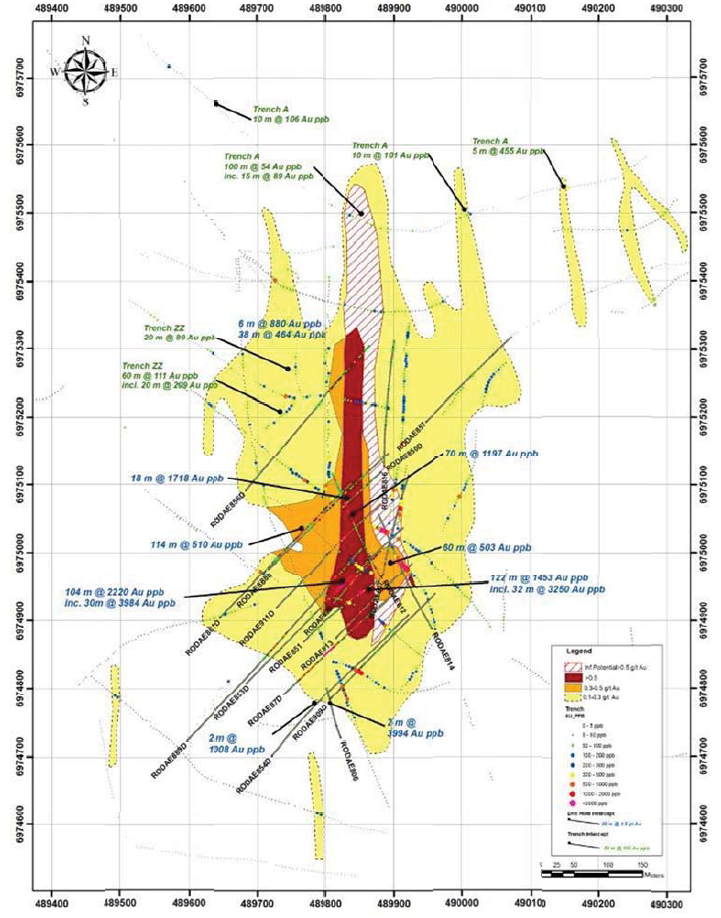 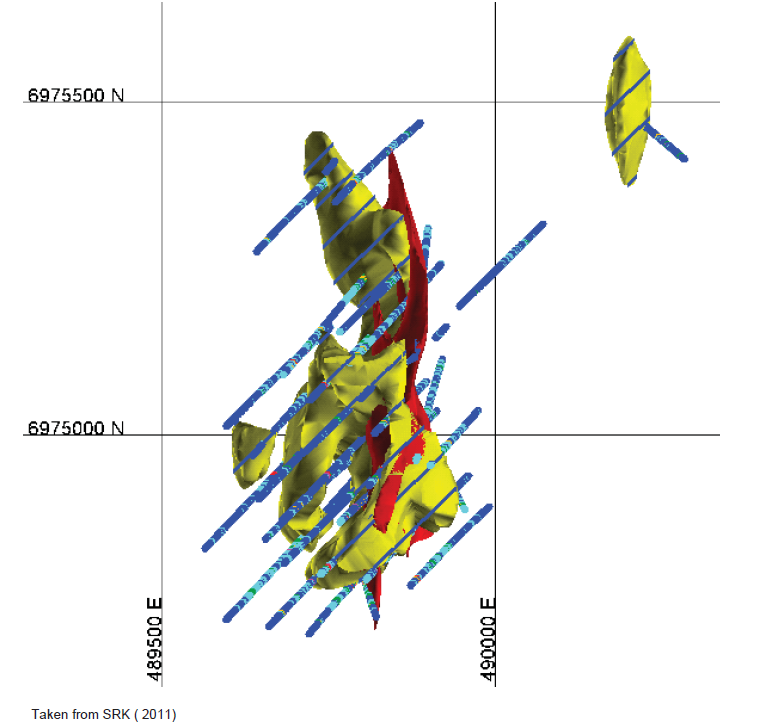 The gold mineralizattion at OdAE has been observed as occurring in, or associated with:

- Black and/or Grey Banded Veinlets (BBV and GVB) typical of the Maricunga Belt gold deposit. They comprise banded amorphouse silica averaging <5 mm in width with alunite being developed locally. Although the banded veinlets are more abundant in the dacite porphyry, the average gold values are higher in the breccias (generally as very fine gold bearing breccia fragments).

- Other veinlets, wich apparently are not related to the gold mineralization are described as:

1. Magnetite (hematite)-chlorite (cmectite) veinlets, located at the more altered zones of the andesite porphyry, and;

2. Gypsum veinlets which are found in the steam heated altered zones or structurally complex zones.

The principal zone of mineralization that has been delineated by the drilling and trenching comprises a northerly trending 100 ppb Au area which consists of a 900 m N-S *500 m E-W central body and minor satellite bodies located to the NE and SW. The main zone of mineralization (deposit) dips steeply to the west. The Cu and Mo grades obtained in the drilling are 2 m at 1.42% Cu and to 0.15% Mo.

The drilling at OdAE identified an oxide zone which extends to a depth of approximately 30 m. Locally, the oxide zone (limonite, goethite, jarosite, hematite) extends to a greater depth as irregular and to lenticulsr zones of mixed oxides and sulphides at about an elevation of 4600 m. Minor, generally very fine grained sulphides (pyrite, chalcopyrite, and sphalerite) are recognized at depth and are only weakly (if at all) associated with the gold. 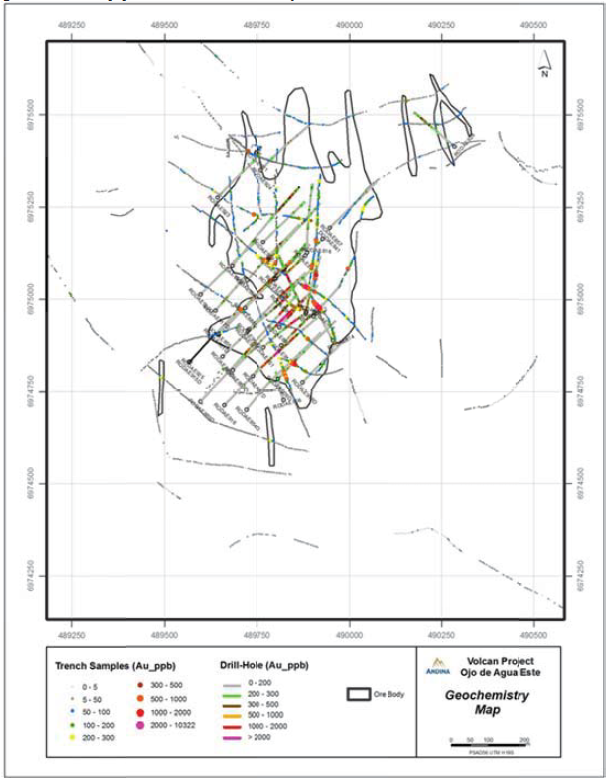 The authors consider that Volcan and including OdAE has characteristics similar to other known deposits which occur within the Maricunga Gold-(Copper) Belt of Chile. The deposit type being explored for is a mixed Maricunga-type gold (copper) and high level sulphidation gold deposit developed in, and associated with, Miocene domal intrusives. These characteristics can include mineralization/alteration types which appear to be intimately associated with, or occur below, high level, high sulfidation epithermal mineralizing systems developed in variably eroded and collapsed Oligocene- Upper Miocene stratovolcanoes and within recurrent intrusive dacitic domes. Hydrothermal and phreatic breccias are frequently developed flanking and transecting (and below the steam heated zones) the domal intrusives and most commonly at fault intersections and/or zones of dilation. 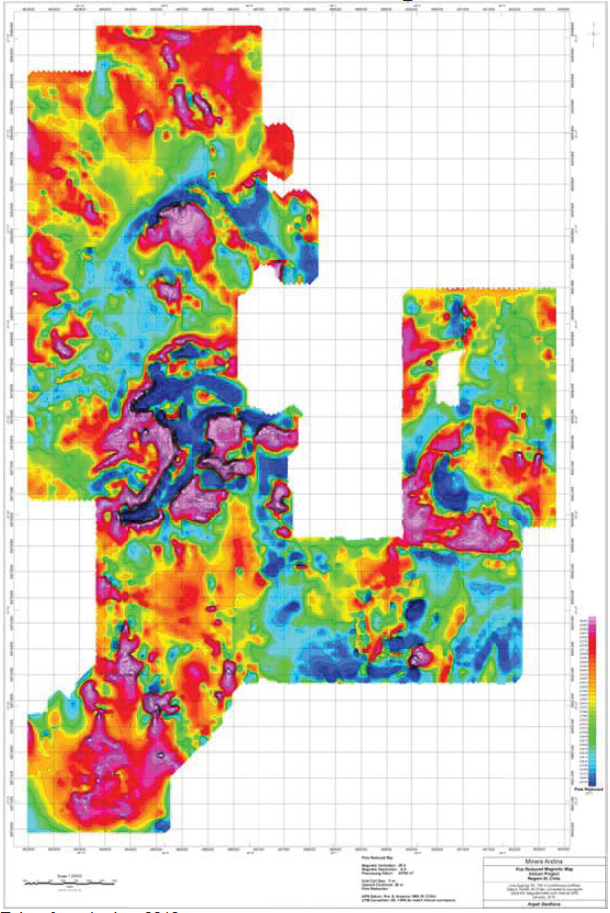 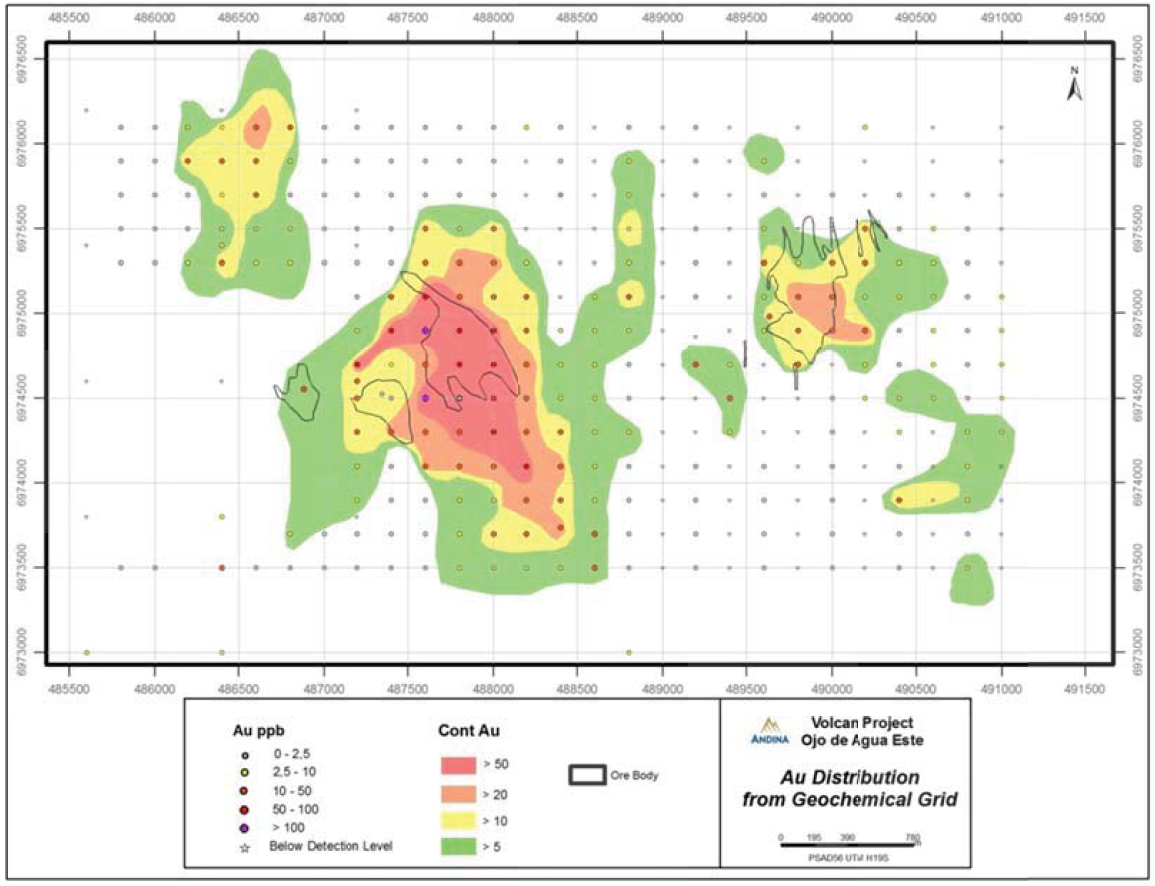 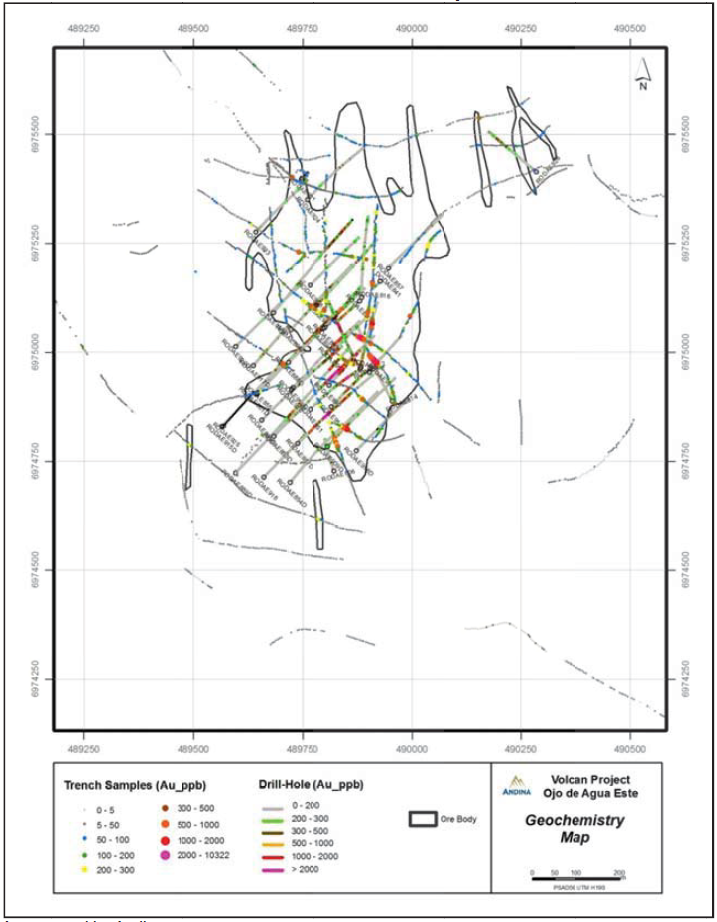