The Cuiabá Gold Deposit is located in the northern part of the Quadrilátero Ferrífero, Minas Gerais State, Brazil.

Cuiabá Mine is located in the Iron Quadrangle, which is a geotectonic unit at the southern edge of the São Francisco Craton, comprising Archaean and Proterozoic terrains, and bordered by Neoproterozoic mobile belts. From a regional viewpoint, Cuiabá Mine is located in the eastern extension of the Serra do Curral inverted homocline, located on the northeastern edge of the Iron Quadrangle. The mine lithostratigraphy consists of an intermediate metamafic sequence of the greenstone belt type and is hosted in the Nova Lima Group which is part of the Rio das Velhas Supergroup. This sequence is characterised by metametabasaltic rocks at the base, overlain by Algoma Type BIF metasediments, carbonaceous schist, and graphitic schist. Above the metasediments is a sequence of metabasalts overlain by an alternating sequence of metapelites (X1) and metapsamitic rocks with minor volcanoclastic (XS). The gold mineralisation occurs in sulphide orebodies associated mainly with BIF layers, and subordinate to minor quartz veins hosted in schists.

Cuiabá is a gold-only Archaean BIF-hosted gold deposit. The deposit consists of an intermediate metamafic sequence of the Archaean greenstone belt type. It is characterised by hydrothermal alteration of the rocks, with the mineralisation occurring mainly in BIF layers, subordinate quartz veins, or in schists. The host to the gold mineralisation in the volcano-sedimentary Nova Lima Group that occurs at the base of the Rio das Velhas Supergroup. The upper sequence of the Rio das Velhas Supergroup is the metasedimentary Maquine Group. The gold mineralisation at Cuiabá has features and characteristics that match the epigenetic orogenic gold deposit model typical of Archaean lode gold deposits. 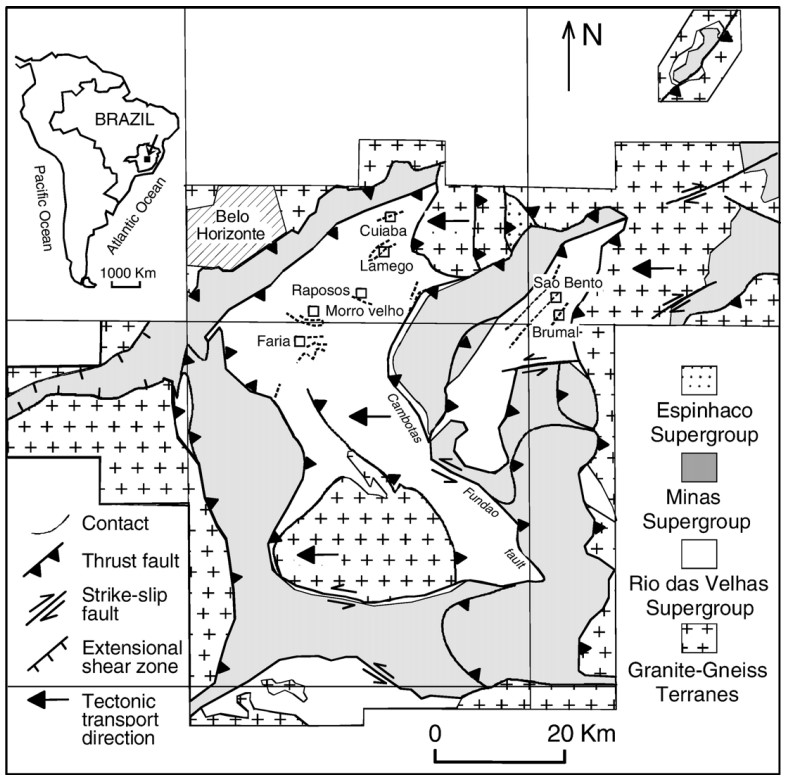 Simplified geologic-structural map of the Quadrilátero Ferrífero showing the location of the Cuiabá Mine and other BIF-hosted gold deposits with >5 t contained Au. Dotted lines in the Rio das Velhas Supergroup are Algoma-type, Archean banded iron formations. Geology and structures are from Dorr (1969), Marshak and Alkmim (1989) and Chemale et al. (1994).

Cuiabá Mine has gold mineralisation associated with sulphides and quartz veins in BIF and volcanic sequences. Structural control and fluid flow are the most important factors for gold mineralisation with a common association between large-scale shear zones and their associated structures. Where BIF is mineralised, the ore appears strongly stratiform due to the selective sulphidation of the iron-rich layers. Steeply plunging shear zones tend to control the ore shoots, which commonly plunge parallel to intersections between the shears and other structures. 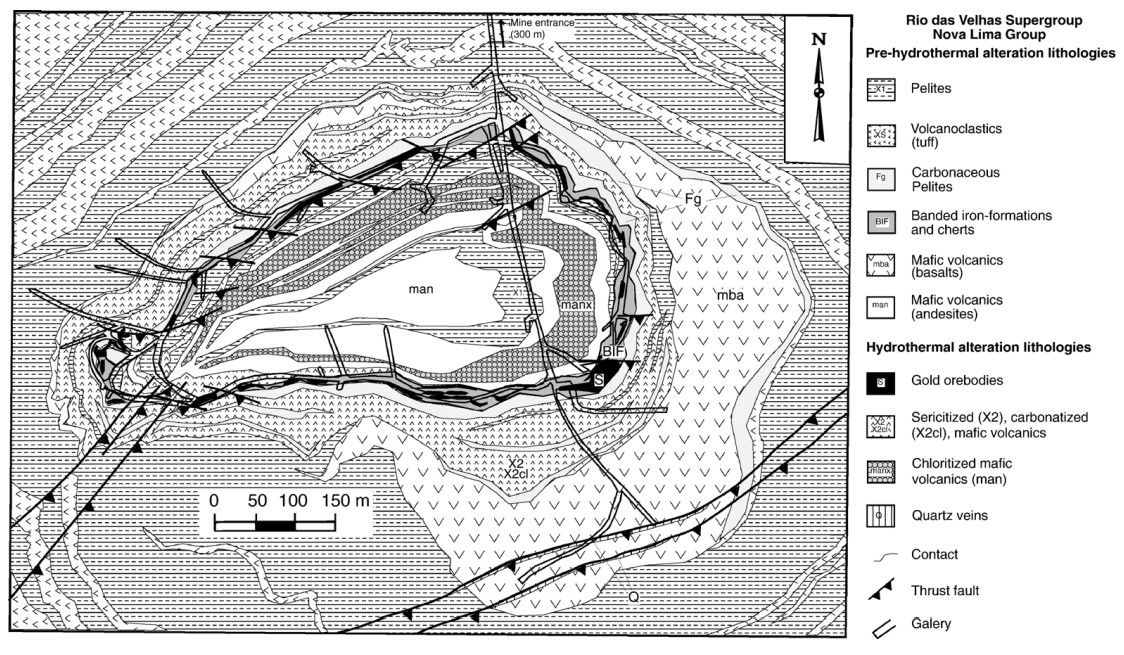 Apparent intersections of thrust faults with tight isoclinal folds in a ductile environment, tend to control the mineralisation structures. The host rocks are primarily BIF and secondarily mafic volcanic, mainly basalt. Mineralisation is believed to be due to the interaction of low salinity, carbon dioxide-rich gold-bearing fluids with the high-iron BIF, basalts and carbonaceous graphitic schists. Sulphide mineralisation consists of pyrite and pyrrhotite with subordinate arsenopyrite and chalcopyrite. The latter tends to occur as a late-stage fracture fill and is not associated with gold mineralisation. Wallrock alteration is typically carbonate, potassic and silicic, showing clear zonation in the underground environment. The ore is mainly concentrated in the silicic and sulphidation zones, inside the BIF or in potassic (and sericitic) zones near the basalts. The main orebodies at Cuiabá are as follows:

NW-SE Map of underground workings at Cuiabá Mine, elevation in metres AMSL 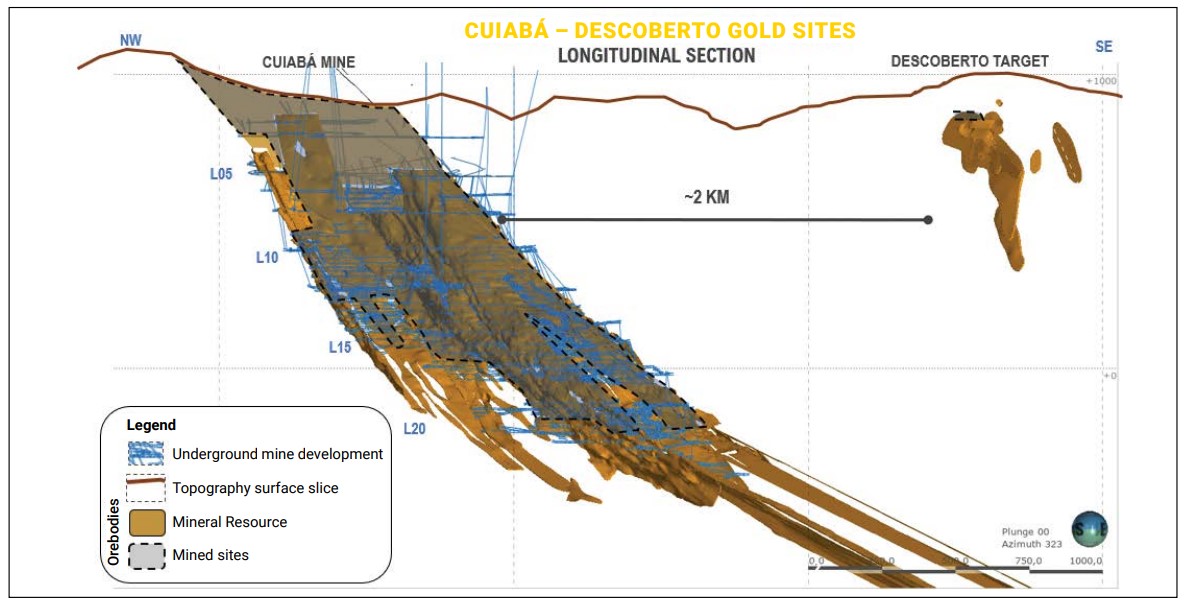 NNW-SSE View of the underground infrastructure and interpolated orebodies at Cuiabá, elevation in metres AMSL 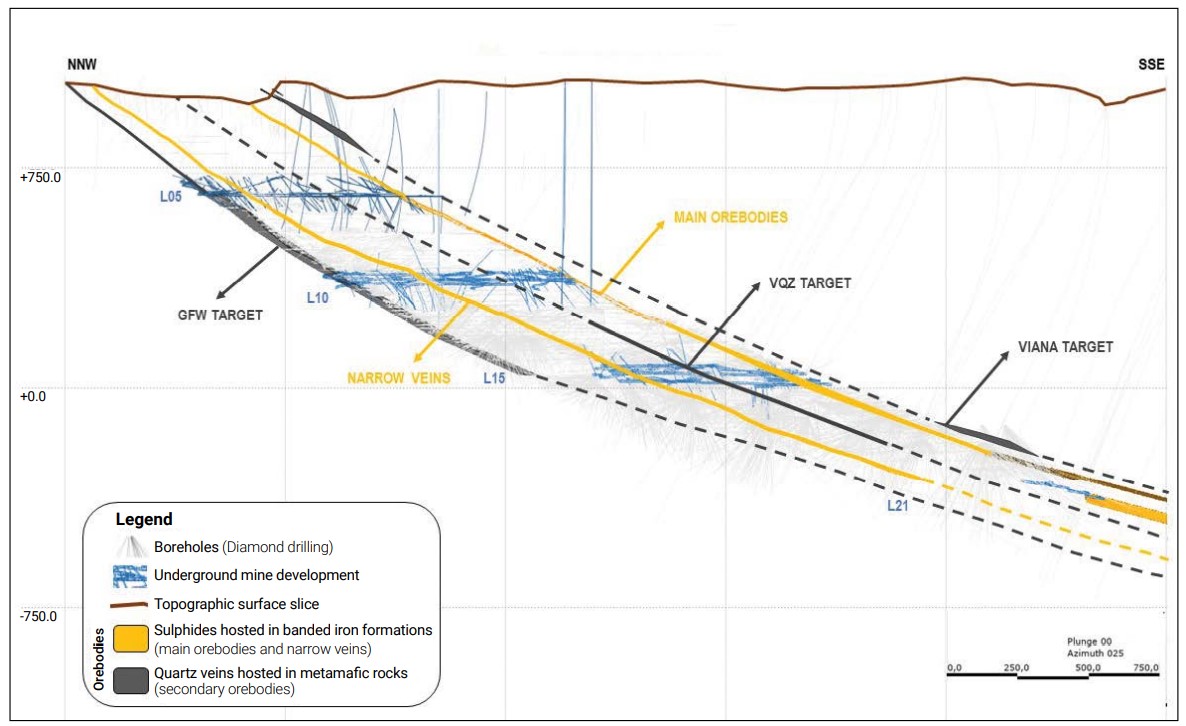 Source: MINERAL RESOURCE AND ORE RESERVE REPORT AS AT 31 DECEMBER 2021;